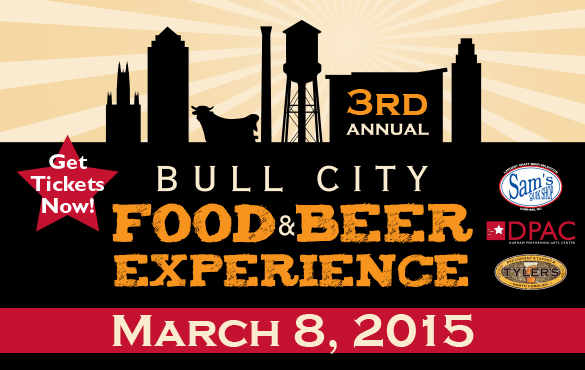 In addition to the food and beer pairings and after rave reviews and grand popularity they are bringing back the Onstage Experience! New this year, the NC Craft Brewers Guild is sponsoring North Carolina Brewers and their many splendid offerings. As you mingle on stage and experience the Durham Performing Arts Center from a grand perspective few get to experience you will have the opportunity to sample a variety of food and drink from local vendors and meet the people behind them.

Admission into the Bull City Food and Beer Experience includes:

The Nashville-based musical group Barefoot Movement won The International Bluegrass Music Association’s Band of the Year Award.  Their music is heartfelt, energetic, and down home. Heralded by CMT Edge as “one of the most promising bands on the bluegrass scene.”

Durham was voted the Tastiest Town of the South by Southern Living Magazine so sampling Bull City food and drink comes highly recommended.  We look forward to hosting each guest who enters our award-winning bed and breakfast.  We offer four luxurious rooms and a gourmet homemade breakfast each morning.  The city of Durham has major local universities, a world renown hospital, great retail shopping locations, famous sports teams, and much more.  Come have your amazing Durham experience with us!

Below is a listing of the restaurants and breweries participating in the 2015 Bull City Food and Beer Experience: