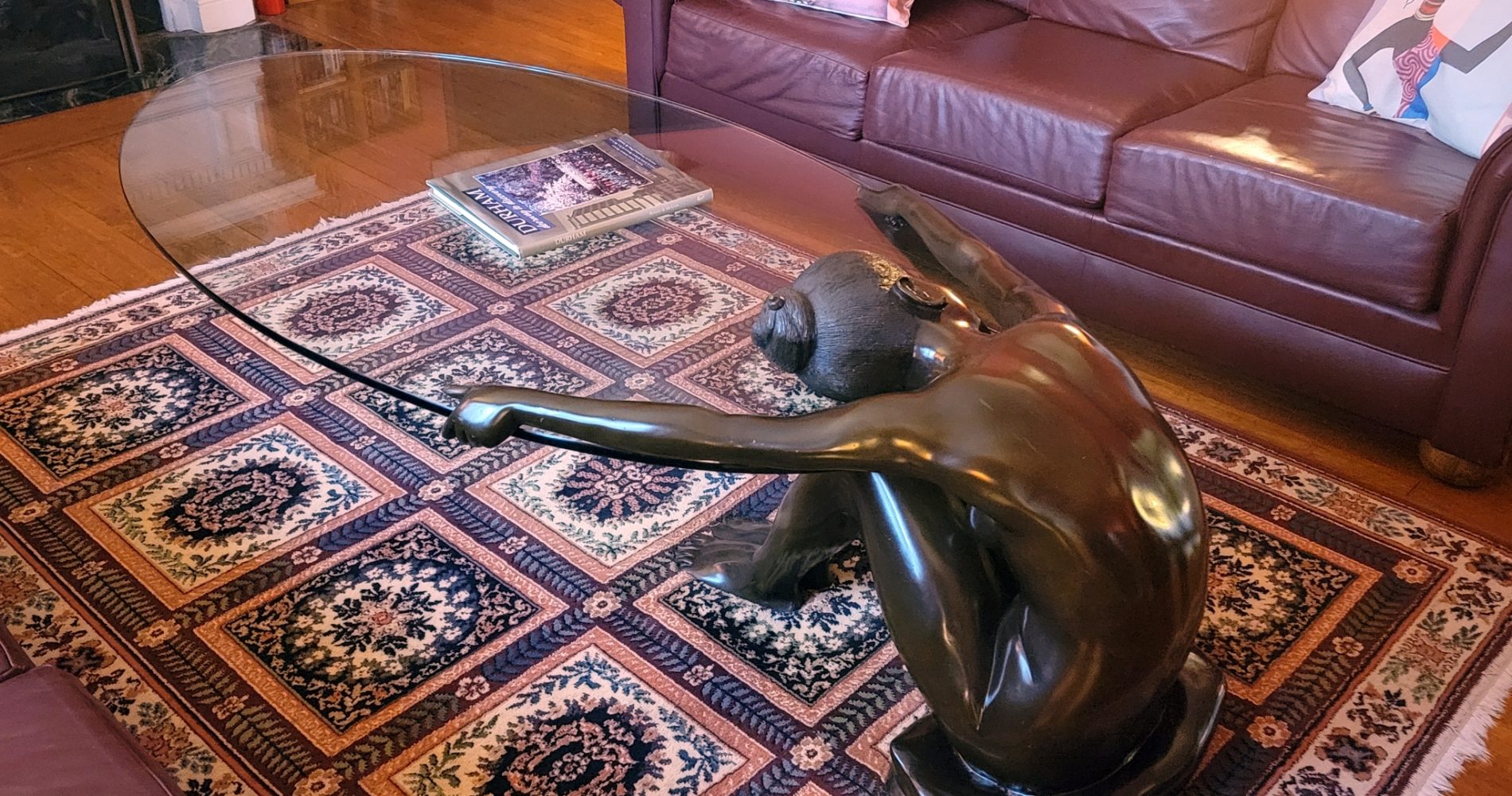 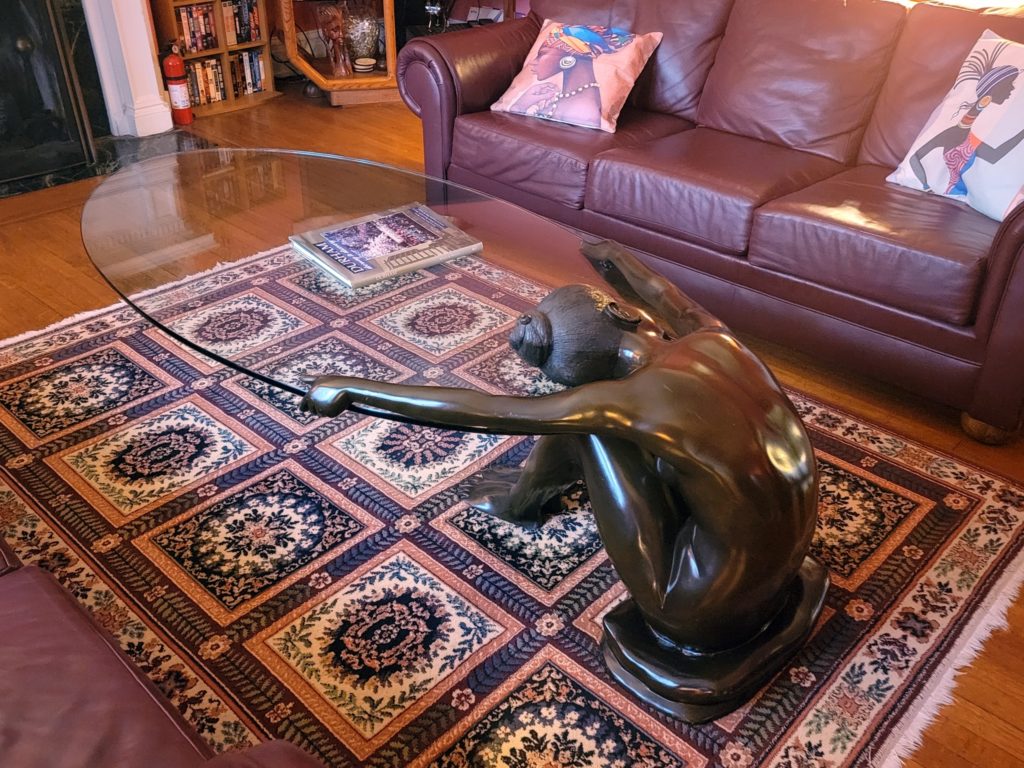 “If you would seek health, look first to the Spine”  ~ Socrates

If you’ve visited the Inn, you may have noticed an abundance of backs. Backs in mixed-media; “Lucy” an Aug Moreau bronze and glass sculpture is our coffee table in Preston’s parlor; we have drawings, photos, sculptures, and various other pieces scattered throughout the common areas in the inn. Well, as you may have guessed there is a story behind them. It all started before we purchased the Inn and became innkeepers. 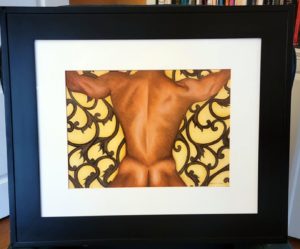 In 1992, the then “rookie” police officer, Daniel, running in hot pursuit of a suspect, slid down a ravine and injured his knee. He successfully apprehended the suspect, but his knee suffered. A few painful weeks later, it was determined that Daniel needed surgery to repair his torn ACL. Outpatient surgery was the plan.  All checked in and prepped for the procedure, he was given an epidural. 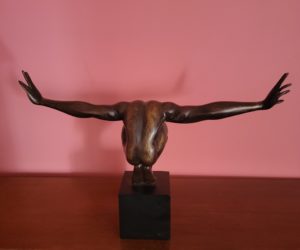 The surgery starts, and the Orthopedic surgeon realizes that this is will take a little longer than the three hours that was planned, so general anesthesia was then administered. Daniel’s knee was in pretty bad shape. Six whole hours later, my nerves a wreck, the surgeon appears to tell me (his bride-to-be) and his parents that everything was repaired and that Daniel should be back to his normal life in a few weeks.

Since the surgery took longer than initially planned, they decided to keep him overnight. 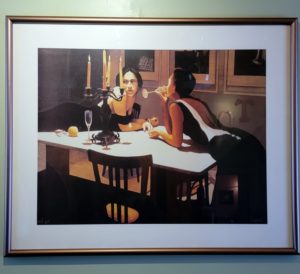 Daniel experienced a headache during the night, a common side effect of general anesthesia. His headaches continued and got worse over the next few days. The doctors determined that he was experiencing were spinal headaches resulting from puncturing his spinal cord during the epidural. So…..what initially started as a 3-hour outpatient surgery turned into a 2-week stay in the hospital. My Mom sat with him at the hospital every day for those two weeks. I’d drop her off on my way to work and stop by to pick her up and see him in the evenings after work. 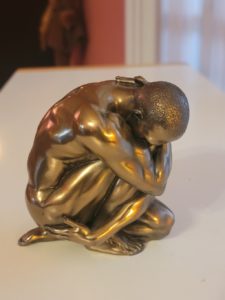 When Daniel was released we brought him home to an adjustable hospital bed in the middle of our living room and a CPM device.  He still had headaches, which were experienced when standing or sitting in an upright position. He was instructed not to take any pain meds that included aspirin so that they could eventually draw blood to patch the puncture in his spine. Excedrine became his friend. Two weeks after being released from the hospital, the doctors were able to do a blood patch to stop the spinal fluid from leaking, and the headaches stopped. During this time, both Daniel and I became aware of just how important your back is to your health and well-being, and we’ve been collecting backs every since.

Our first piece, a charcoal print, the back of a macaw was purchased from Wayne, an art student, attending the College of Charleston in SC in 1992, before we owned the Inn.  This piece was Wayne’s semester project. We ran into him proudly showing it off to a friend at one of the shops near the straw market in downtown Charleston. Daniel approached him and convinced him to sell it to him.  Of course, he was apprehensive because his grade weighed heavily on this project. Daniel told him if he could create it once, that he could do it again, and if he or his professor was not satisfied with the outcome to have him (Wayne’s professor) give him a call, and he’d drive back to Charleston with the original. Wayne signed the print and named it “Back Series”. We’ve never heard from Wayne or his professor. We have imagined that he’s somewhere in the world creating brilliant artwork.

We have purchased other back pieces throughout our travels, and since opening the inn, several of our friends and guests have blessed us with backs. When you plan your next visit to the Raleigh, Durham, Chapel Hill area of North Carolina, we invite you to stay with us at Morehead Manor in Durham, to enjoy our hospitality and see our collection. 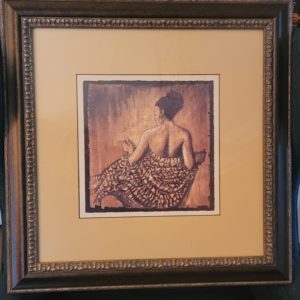 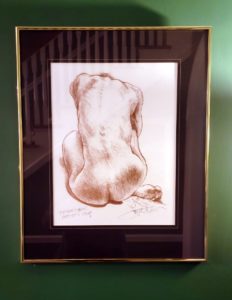 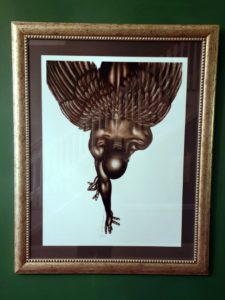 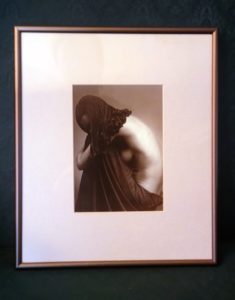 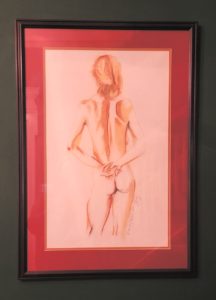