The American Dance Festival of 2015 is happening near our Durham, North Carolina bed and breakfast.  Morehead Manor Bed and Breakfast is pleased to be within walking distance to an award-winning performance venue like the Durham Performing Arts Center.

UNTITLED #12-2 began in Miami at Art Basel where Shen Wei’s paintings provided the inspiration and environment for a dance piece for 12 dancers. The dancers’ movements brought them into abstract compositions that mirrored the paintings surrounding the dance. For The American Dance Festival, Shen Wei transfers this piece to the stage and expands it beyond the original Miami presentation. With lighting co-designed by Shen Wei and Christina Watanabe and video by Rocco DiSanti, UNTITLED #12-2 promises to be an extraordinary addition to his repertory.

Making its annual summer pilgrimage to The American Dance Festival, Pilobolus presents the ADF-commissioned world premiere of Thresh|Hold (2015). Created in collaboration with the Olivier Award-winning Venezuelan choreographer Javier de Frutos, Thresh|Hold is a physically daring quintet that takes us through the labyrinthine mind of a young woman as she confronts lost love. Fragmented memories burst back and forth through a moving door, catching us in an experience at once raging and tender, desolate and intimate. Fantasy, athleticism, strength, confinement, fetters, and escape are all at play in this tantalizing work.

Day Two (1981) evokes a tribal atmosphere on the second day of the creation of the world, from its earliest forms of life to the moment at which creatures of the earth take flight into the air. Set to a soundtrack from Brian Eno and Talking Heads, Day Two captures the awe of evolution and the wonder of existence.   Note: This performance contains nudity.

Acclaimed by critics for its exceptionally emotional performances, Noche Flamenca is one of the most authentic flamenco companies performing today, and Soledad Barrio is its star. Soledad Barrio and Noche Flamenca bring Antigona (2014), an evening-length flamenco interpretation of the text and themes in Sophocles’ tragedy, Antigone. The themes in the work include catharsis, issues of dictatorship, repression, loss, the strength of family, and female empowerment. Combining live music, song, and dance, the work promises to be both gripping and intensely moving for audiences.

Paul Taylor Dance Company will be back to present the classic work Esplanade (1975). Set to Bach and based on everyday movement: walking, running, jumping, and sliding, the dance remains as daringly exuberant and eloquent today as the day it premiered. Syzgy (1987), set to Donald York’s abstract, pulsating score, is a virtuosic work that explodes with cartwheels, leaps, and meteoric spins.

Bill T. Jones with Associate Artistic Director Janet Wong and his company present Analogy/Dora: Tramontane, the first of three new evening-length works from Analogy: A Trilogy. The trilogy brings into light the different types of war we fight and, in particular, the war within ourselves.

Analogy/Dora: Tramontane is based on an oral history Jones conducted with 94-year old Dora Amelan, a French Jewish nurse and social worker. Amelan’s harrowing, touching, and inspirational story is broken into approximately twenty-five episodes that become the basis for choreography and songs. These episodes chronicle her early life in Belgium, her mother’s death as the Germans were marching into Belgium, and her experiences working at an underground Jewish organization in Vichy France’s internment camps, Gurs and Rivesaltes. This is a portrait of the ability to persevere and survive.

This American Life host Ira Glass has been working with Monica Bill Barnes and Company to invent a show that combines two art forms that, as Glass puts it, “have no business being together—dance and radio.” One is all words and no visuals. One is all visuals and no words. The result is a funny, lively, and very talky evening of dance and stories. “What makes it work,” says Glass, is a shared sensibility. As dancers, Monica Bill Barnes and Anna Bass are these amazingly relatable and funny storytellers without words. This special event is for one night only.

Since its founding in 1986, Doug Varone and Dancers has commanded attention for its expansive vision, versatility, and technical prowess. From the smallest gesture to full-throttle bursts of movement, Varone’s work can take your breath away. In ReComposed (2015), co-commissioned by The American Dance Festival and the Nasher Museum of Art at Duke University, he creates a dance inspired by American abstract artist Joan Mitchell’s pastel drawings. Mitchell used gestural, sometimes violent brush-work, and described her paintings as “an organism that turns in space.” With lighting design by Robert Wierzel, Varone’s work hauntingly echoes Mitchell’s explosions on canvas. “In each of us is a storyteller, creating tales filled with the memories of our lives,” said Varone of his solo, The Fabulist, commissioned by ADF and premiered to great acclaim in 2014. 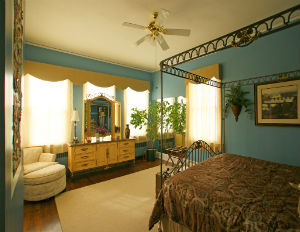 Our luxurious Durham bed and breakfast is the perfect place to stay when you see these amazing American Dance Festival live performances at the nearby Durham Performing Arts Center. We love hosting guests from all over the world and each morning treating them to our delicious gourmet breakfasts.